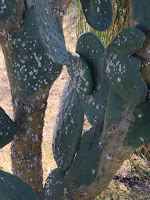 When the cochineal scale insect (Dactylopius coccus) invades, it looks like harmless white fluff, but really, it’s mission is to sink its mouthparts into a juicy nopal cactus pad and slowly suck out the life from the inside until it withers and dies.

The desert is a place of resourcefulness and resilience. One doesn’t last long without these skills. Historically this bug was brushed off the cacti, collected, dried and mashed to dye fabric a deep, beautiful red. Without help from people or other creatures intervening to save the cacti, the nopal is left to come up with a defense of its own.

With the passage of Arizona’s discriminatory Americans with Disabilities Act notification bill (SB 1406) and then only a few weeks later, with the House passing the American Health Care Act (AHCA), the replacement for the Affordable Care Act or Obamacare, I have been struggling with the feeling of defeat. It’s hard not to notice how both bills happened in an oddly similar way. The first and original versions were heavily organized against and defeated, only to be brought back in a deceptive and sneaky way to pass.

I know I have every right to be angry, disabled people are under attack.  I know that I was proactive even if this activism didn’t stop the passage of these bills. At the state level, what lingers are the representatives who looked me in the eye and promised to not vote for it and then did. At the national level, the House representative told the Disability community not to worry, that healthcare repeal wasn’t moving forward, and then voted against us, even leading the rally to vote by shouting, “Let’s get this f-king thing done!” Or every business owner I’ve ever emailed or talked to who agrees disability access is an issue, promises to fix it and then nothing changes. Whatever their reasoning, I am left feeling like a nopal cactus pad, trying to grow into the community I live in while the lies suck out my fight. Lies, like insects, look harmless until one watches what they can do.

One insidious way these lies play out is how diversity is framed as a threat to nondisabled people in power. The lie that my body is a threat, drains me, makes me feel confused, makes me mistakenly think I somehow failed to convince them or failed to provide the best examples. That somehow if I had just done more, then things could’ve been different.

This lie sits like a weight on my heart sucking the life force out of my motivation, joy and tenacity. The reality is, despite my and others best efforts, we can’t control what happens. Our lives are affected and we are forced to deal with the consequences.

I want to turn away and hide. Retreat into myself and the safe places I’ve carved out to survive.

So, I honor that reaction and I practice self-care by being alone. Being in my own solitude I focus on doing small things which bring me joy and are in my control, which allows me to detach from this helplessness that feels all consuming. I give myself time to recover. 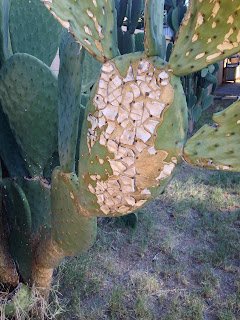 There’s no know defense mechanism for the nopal cactus to combat the cochineal scale insect yet, in my yard I observed one pad without insects present. The side of the pad was peeling like our skin does after a bad sunburn. I wondered if it was sloughing off parts in order to shed the layers where the bug had latched on.

As an activist and artist, I can’t withdraw forever. After these experiences where I’m ignored and discriminated against, I find myself internalizing a feeling of forced obedience. If I scrape these lies off my body to transform them into something I can show the rest of the world, they can dye the fabric of my resistance.

After the ceremony, I join friends and I risk describing how I’m actually doing. I feel myself slowly brushing off the lies latched onto my body. I describe how helpless I feel. I watch their faces shift into listening. No one knows what to say and yet one by one they brush off the lies they have been carrying around and somehow, they relate to pieces of my struggle. Slowly through conversation, truth and laughter I recognize the crushing of lies creating a brilliant color dyeing a fabric which I wrap around my fragile heart. Truth stains proof of my resistance.

This resistance doesn’t feel like plans or action, more like shedding. Shedding the layers where holes poked through my self-worth and stamina. Shedding to show up in the sun once again.

Having my truth witnessed transforms the lies, loosens their grip, making a cohesive, color which is soft and energized. By witnessing other’s truths, often unrelated to mine and in the midst of being realized, together they create an expanding stain of dye. The preparation for a fabric of resistance to be made together.

Fortified by truth I am slowly, achingly slowly, moving through the hurt. I am breathing into my anger. I am examining the color of resistance which is left after the transformation of lies. 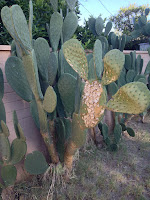