Friendship and Navigating the “De/Fence”


Defense: Resistance to something perceived as a threat.
Fence: Tall, vertical surface. Person-made to keep something in or out.

In friendship, I’ve hit the De/Fence more times than I can count. The De/Fence hides in the landscape of friendship, like a camouflage wall sticking out of the desert sand, blending in until I smack into it face first.

There’s something that happens when new friends are confronted with disability in a real-life concrete way. In everyday conversations, they can gasp with outrage at one of the daily stories of exclusion I experience. They nod their head in agreement, about how unjust it all is.  However, when the reality of disability access inevitably crashes into their idea of fun, the De/Fence has the ability to end a friendship.

Like when I gently refuse to go to a coffee shop with a new friend because it’s inaccessible and they don’t quite understand why because I can “technically walk”. Months later, the Fence appears when I realize that they haven’t called in a long time and no longer seem interested in hanging out.

As a teenager, I wasn’t as worried about the De/Fence. Even into my 20s, there were still a lot of possible people to meet and hang out with that acknowledged my disability access needs. But, as I’ve gotten older, good friendships have become rarer, harder to cultivate. People have less time and energy to devote to friendship. Collisions with the De/Fence have become harder to shake off and move on.

Hitting the De/Fence is hard to describe. It’s often a slow-motion crash. I feel myself getting nearer to it when I have that uneasy feeling in my stomach. An aching churning feeling that I need to bring up some access issue. When I was younger, I’d try to hold off that feeling and wait to bring up access issues until I knew for sure that something was really going to mess my body up. This tactic left me in some bad situations, like sitting on the floor in the dark at the back of a concert arena, with concertgoers tripping over me, because I thought there’d be chairs and there weren’t. As I’ve gotten older, I’ve gotten clearer on my body’s boundaries. While this is helpful to me in knowing what I need, it also leads me to smack into the De/Fence with new friends sooner in our relationship than before.

Usually, when I’m making new friends, they can hang when I am steering the friendship into neutral territory. I suggest a few accessible restaurants or a poetry reading I know already is accessible. Things get complicated when what they want to do, means situation where the access is unknown.

For example, a new friend wants me to go with them on a last-minute trip. It may only be a couple hours away and they wanted to do ____X___ there. Immediately I’m confronted with several issues. One, I generally need a big cushion of time before and after doing something like this in order to prepare my body and to recover. Do I have space in my schedule to do that if I need to? Two, they usually haven’t researched anything about the access of the location. I need to know, is ___X____ more of a walking or standing or sitting event? I need to know if the bathroom is accessible. Friends will patiently try and answer my questions to about this point. Then we reach the next layer of access. They want to bring other people in the car, but I need to bring my scooter. Or they want to stay at another person’s house and so then I also need to bring a toilet seat heightener and a shower chair. At this point, their patience begins to unravel at the complexity of what I need in order to function. Usually in the end, they are giving me their friend’s number (that I’ve never met) and wanting me to call and ask all the questions myself. “Hello De/Fence.”

The weird thing is, even if I take the time to explain in detail the access needs I have, even if I call that friend-of-a-friend and have an in-depth discussion with them about the height of their toilet and where we will sleep, the De/Fence really isn’t navigated around. For some reason, even though I’ve explained the need for an accessible bathroom several times, nondisabled friends especially, continue to forget that something like an accessible bathroom is something I really need.

It’s hard to explain the subtlety of disability to a nondisabled friend. A small event where there is no disability access can leave me recovering for days, with other people in my life having to help me meet my basic needs. My nondisabled friend sees it as a one-time injury, not a result of a lack of access. Even harder is that my body acts different on different days. This inconsistency means that sometimes the consequences of ignoring my disability needs are small and other times they are big.

Access is complicated to communicate about. Sometimes I don’t want to share the details of how my body works. Sometimes the planning and advocating gets to be too much for me too.

I was talking to another Disabled friend about this. She has a nonvisible intellectual disability, but jumped in with her own stories and examples of hitting the Fence with nondisabled friends. For example, she often needs assistance with reading things like menus or help with basic math, but when she asks for help, her friends laugh at her. When she confronts them about them laughing at her, they say that they “forgot”, as if she should take it as a compliment or something. At jobs she continually has to ask for the same accommodations again and again and friends there do not back her up or help remind each other about the access she needs.

It’s not about perfection. It’s about trying. And putting the responsibility on the Disabled person to demand, advocate for, or figure out access isn’t really being a friend. 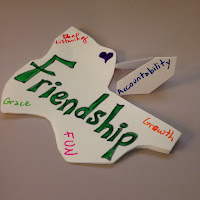 Another Disabled friend I have often “passes.” He individually negotiates his disability, and has the privilege to do so in many ways. Yet, I see his frustration level growing with nondisabled friends who continually don’t understand why he can’t participate in working at the community organization where they all hang out or who just leave him behind to go to an event when he’s in pain. He hasn’t learned yet how to believe his access needs are valid. His friends, all outspoken social justice activists haven’t learned to believe his access needs are part of what they must consider as part of the friendship and their activist work.

Sometimes the silence of the De/Fence is the worst. Friends advertise an inaccessible event they organized but when you point out the lack of access, they instead just stop checking to see if you’ll go. They post their pics from the club that you know they decided not to invite you to, cause it’s “too complicated”.

It’s not expecting the world to be perfect or for friends to be perfect. Interdependence (working together to get things done) is something that we as Disabled people often have to teach others in order to have long-lasting relationships. Disabled or not, we all have to learn how to discuss mistakes that hurt the other person. We have to learn how to be open to long, ever deepening conversations about what those mistakes mean and what we can do.

Interdependence is the tunnel we burrow under the De/Fence. Friends who are willing to be flexible in both giving and receiving in a relationship, who understand that sometimes it’s going to take some compromise and hard work, these are people with whom we are allowed to be our full selves.

Interdependence however, isn’t a skill we can learn in our head, it is a skill which must be learned in one’s heart. We deserve to have people in our lives that are willing to open their hearts to us.

As much as I invest in a friendship, I can’t be the one to hold my friend accountable. The first thing I had to learn about the formidable De/Fence is that I am not responsible for other people’s growth. As I’ve gotten older, I’ve gotten clearer about my body’s right to safety. I no longer have patience with friends who ignore my disability because it’s “too complicated.”

The Disability community has worked hard to reject what society teaches, that disability access is a personal problem. The Disability community instead puts forth that Disability is a social and political issue. And yet, either perspective our friends understand can create a problem in them in considering what their responsibility to us is. When we think of access as a personal problem, then it is the Disabled person’s problem to figure access out. When we view access as a political and social issue, then we view it as “out there”, something that needs to be addressed by laws or organizations. Disability in essence is a relationship issue. This is because we are actually unable to live our lives fully on our own. (We could argue no one can make it on their own, but Disabled people can’t usually “fake it” as well.)

When I refuse to take on all of the responsibility to figure out access, I am asking my friends to join in on this social and political responsibility. This is an asking of everyday, ordinary people to commit to radical social change. We aren’t used of expecting in our relationships to create social change. But in reality, this is all that ever does.

So how does this work in real life? It can be heart-breaking, I won’t lie. Interdependence takes a kind of accountability that none of us are very practiced in. It takes time, patience and a lot of mistakes. The hardest thing is that the learning process never ends. Interdependence is asking friends to commit a level of energy and time to making it happen whenever you get together.

I’ve tried to find a middle ground with friends who for whatever reason can’t practice interdependence (and as a result will only be hangout, superficial friends).  Most friendships are ones where we do one specific activity because it keeps access simple for them. The few friends who have learned interdependence in their hearts are the ones I go on adventures with. They are the ones I trust and invest the most in and try to show up for however I can.

The thing about the De/Fence is that I can’t ignore it’s there. I have a choice though. I can take it personally, when a friend can’t burrow beneath it, or I can let my disappointment transform into compassion and either release them or limit my activities with them.

I’ve started talking to new friends about interdependence. Mostly they kind of look at me with wide-eyes and say nothing, but at least by my bringing it up, we both know that it is part of our relationship. I tell them that I believe in a kind of friendship that can change the world we live in.